William Baer’s fiction has been awarded a Creative Writing Grant from the National Endowment for the Arts. He is the author of two collections of short stories: Times Square and Other Stories and One-and-Twenty Tales. His short stories have been published in numerous literary journals and magazines, including The Iowa Review, Kansas Quarterly, Mississippi Valley Review, and The Dalhousie Review. 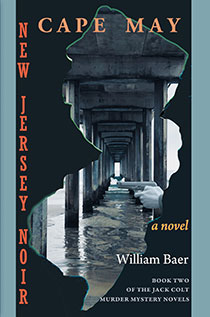 After solving the assassination case of his beloved uncle, Colt finds himself truly alone, ditched by his girlfriend. However, there’s not much respite or time for introspection for him: he’s called on again to solve a new murder case, along with a suspiciously related cold case. What follows is another gripping tale in the backdrop of the Garden State’s sights and scenes, including its picturesque beaches, casinos, and the rural Pine Barrens. In New Jersey Noir: Cape May—Book Two of his Jack Colt Murder Mystery Novels series—William Baer continues to enchant and spellbind.

“In Jack Colt, William Baer gives us a private detective perfectly suited for the Garden State: gritty, charming in spite of himself, sidesplittingly hilarious and incomparably authentic. Baer proves himself the Sinatra of Noir, the Edison of Intrigue, the Springsteen of Suspense—and a rightful heir to Hammett and Chandler. Far more fun than a night out in Atlantic City or a weekend at the Jersey Shore.” — Jacob M. Appel, author of Millard Salter’s Last Day

“Not since Donna Tartt’s The Secret History have I read a novel as mesmerizing, engrossing, and delectable as William Baer’s New Jersey Noir.” – Terri Brown-Davidson